Another blank period, where I haven’t posted anything. I have been super busy and also not felt like posting/writing anything… I have been so focused on woodworking for a very long time, not much else have “gone through” my screens. Just not anything I’ve thought was post-able. I think maybe I’ll start writing more even if…

I feel like I “work in” periods.. Woodworking, carpentry, photography, remote control, etc… When ever I’m in a “mood” nothing else seeps through. Lately I’ve gotten very interested in sewing, tailoring and re-making of clothes and garment. I’m not a great wearer of other head gear asides from a cap, but I’ve wanted to make a beanie.
I sewed a simple one-sided beanie, but as was suspected it was not great. In a video on YouTube (which is where I learn most things) I saw a short clip on crocheting. Got an idea of making a beanie with a crocheted head-band. So.. I watched a couple of videos and tried to make a head-band.

Below is my first attempt of combining sewing and crochet. 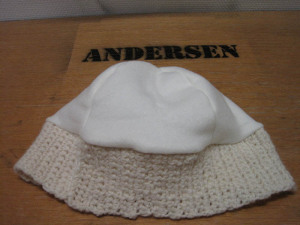 Not the best looking thing, but acceptable!