I’ve had this cheap-o toy RC car for some time, but it’s really boring and slow. It’s one of those mass produced things, that comes with it’s own “transmitter”. 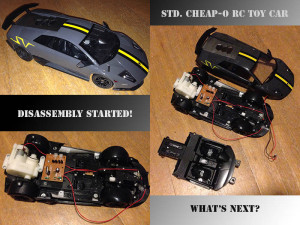 Top left is how it looked prior to any work. It’s just held together with a few screws on the bottom. The circuit board inside the body is the receiver (although I only reluctantly call it a receiver… ). I have a real (although it’s getting a bit old) transmitter and receiver. A Futaba T4EXA transmitter / Futaba R136F receiver.

Having never attempted something like this before, I’m not sure what I’ll be able to make, but hey…; That’s a big part of the fun.

Here’s a very short clip of what I’ve achieved so far:

Planned: Learning a bit more on this topic, in order to make it like I picture in my mind. Specifically more on the electronics of RC. Also; I have many many ideas for further work!